From Grape to Glass: A spotlight on the Harvest Journey in Oregon Wine Country 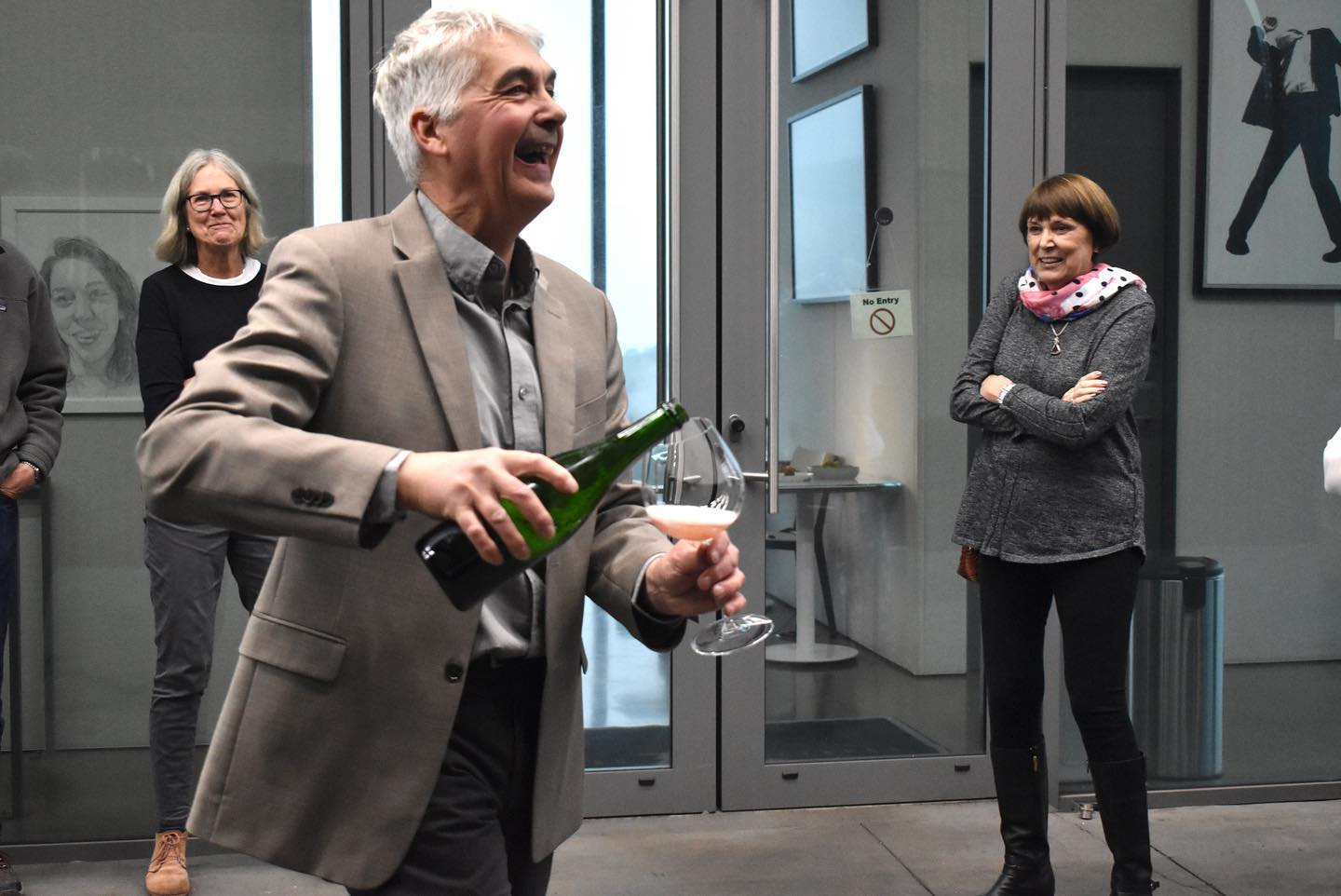 This month The Dundee is celebrating all things Pinot Noir, but while many of us know that Oregon has the perfect soil for this nuanced varietal, how does this special grape transform into the wine we drink? What happens once the grapes are picked from the vines? And where do science and the creativity of the winemaker intervene and further compliment nature’s process? Dominique Mahé– head winemaker and general manager of Furioso Vineyards –was kind enough to answer our questions, (as we sipped from a glass of their impeccable 2019 sparkling Blanc de Noir) and now we’re here to give you the inside scoop on the wine grape’s journey from the moment it’s plucked to your very first sip. 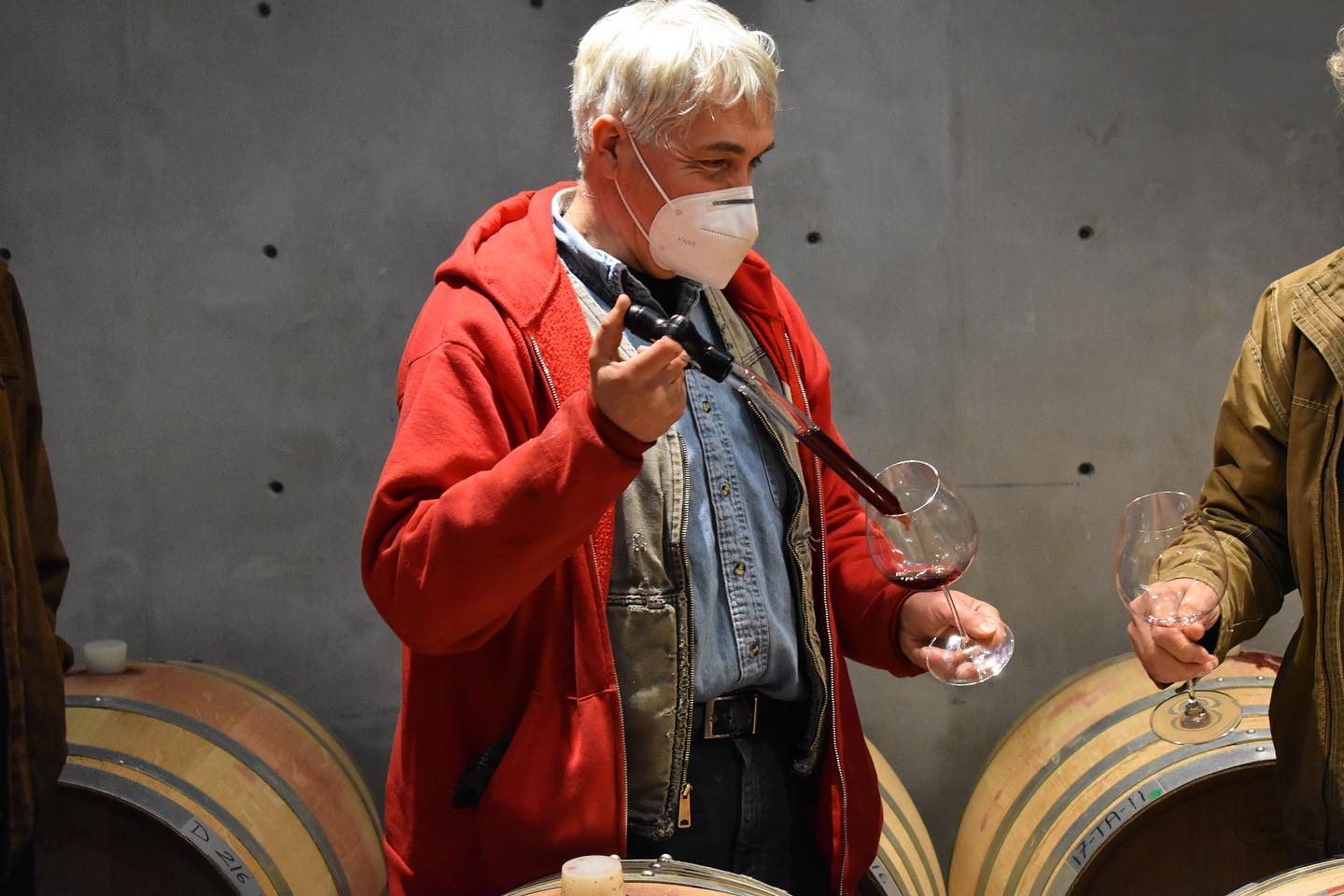 Our guide, Dom, serving up the goodness right from the barrell. 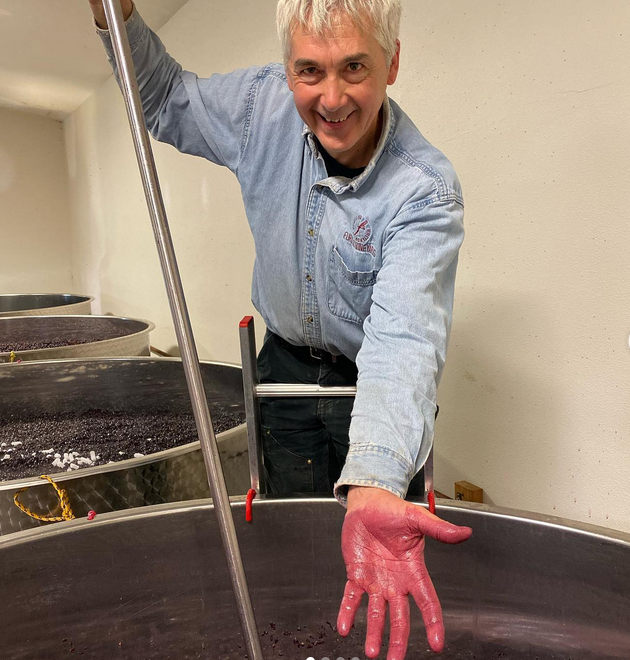 As a winemaker, getting your hands dirty is just part of the job!

It starts how you might imagine… in order for wine to be made, grapes must first be plucked from the vines. But how does one know when a grape is ready? Harvest season usually takes place between September and October, with cooler years often meaning a later start. But dozens of attributes can define the date of harvest, and at Furioso that decision comes down to Dominique Mahé. Luckily, he has some tricks up his sleeve when it comes to what to look for. First off, check for the budding of the flower. “The rule of thumb,” Dominique told us, “is that the grapes are ready to be harvested 100 days after budding.” This is a general rule, of course, but it sets the scene. The changing color of the fruit is also a signal that harvest is on its way (this change is referred to as “veraison”). When the grapes turn red (in the case of Pinot Noir, at least) it’s time to pay extra attention. When it comes to the details though, Dominique uses chemistry and creativity to find a balance of four important attributes: sugars, flavors, tannins, and acidity. 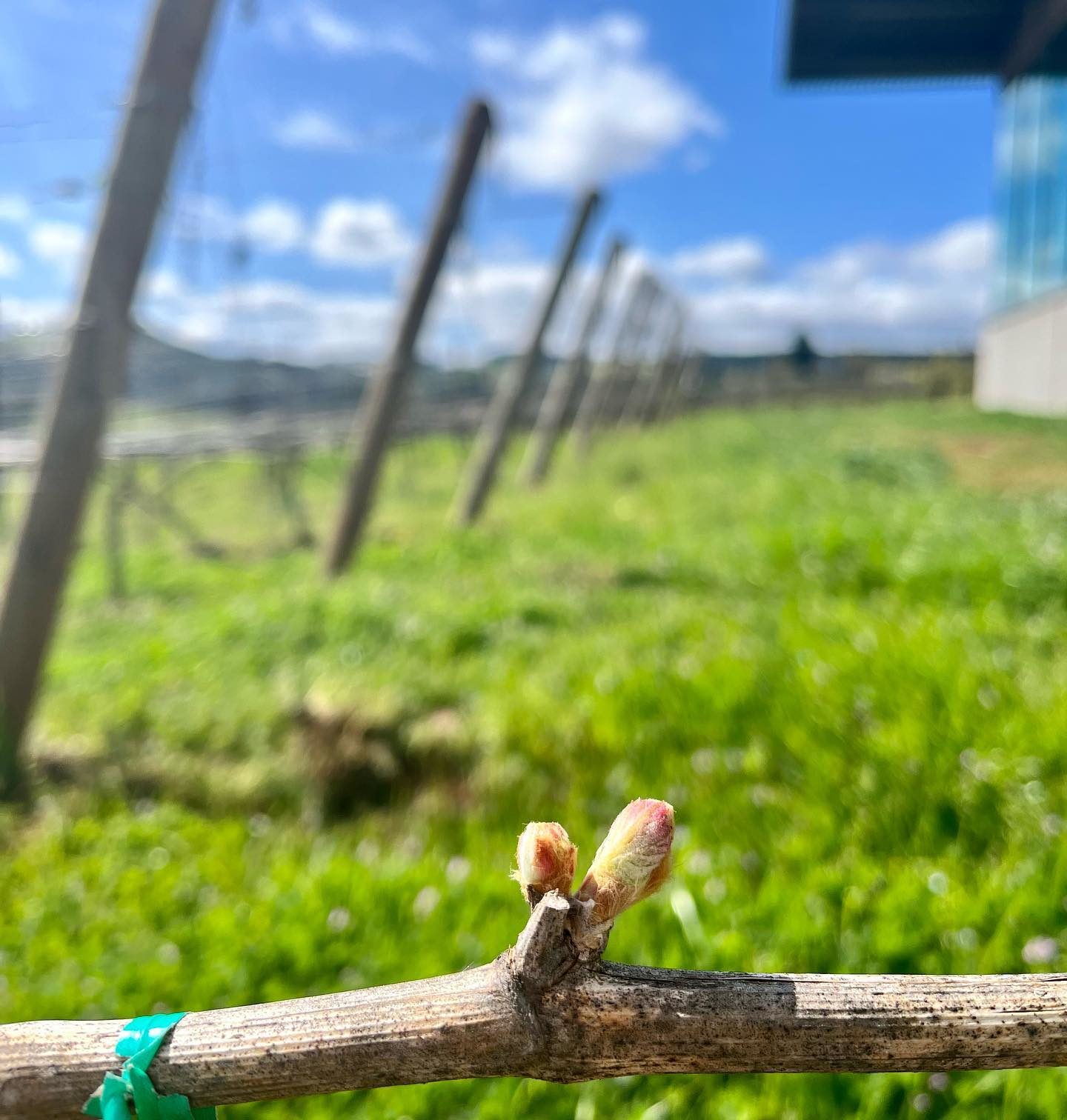 Before there is harvest, their is bud break! Dom says, the buds show about 100 days before the grapes are ready to harvest. 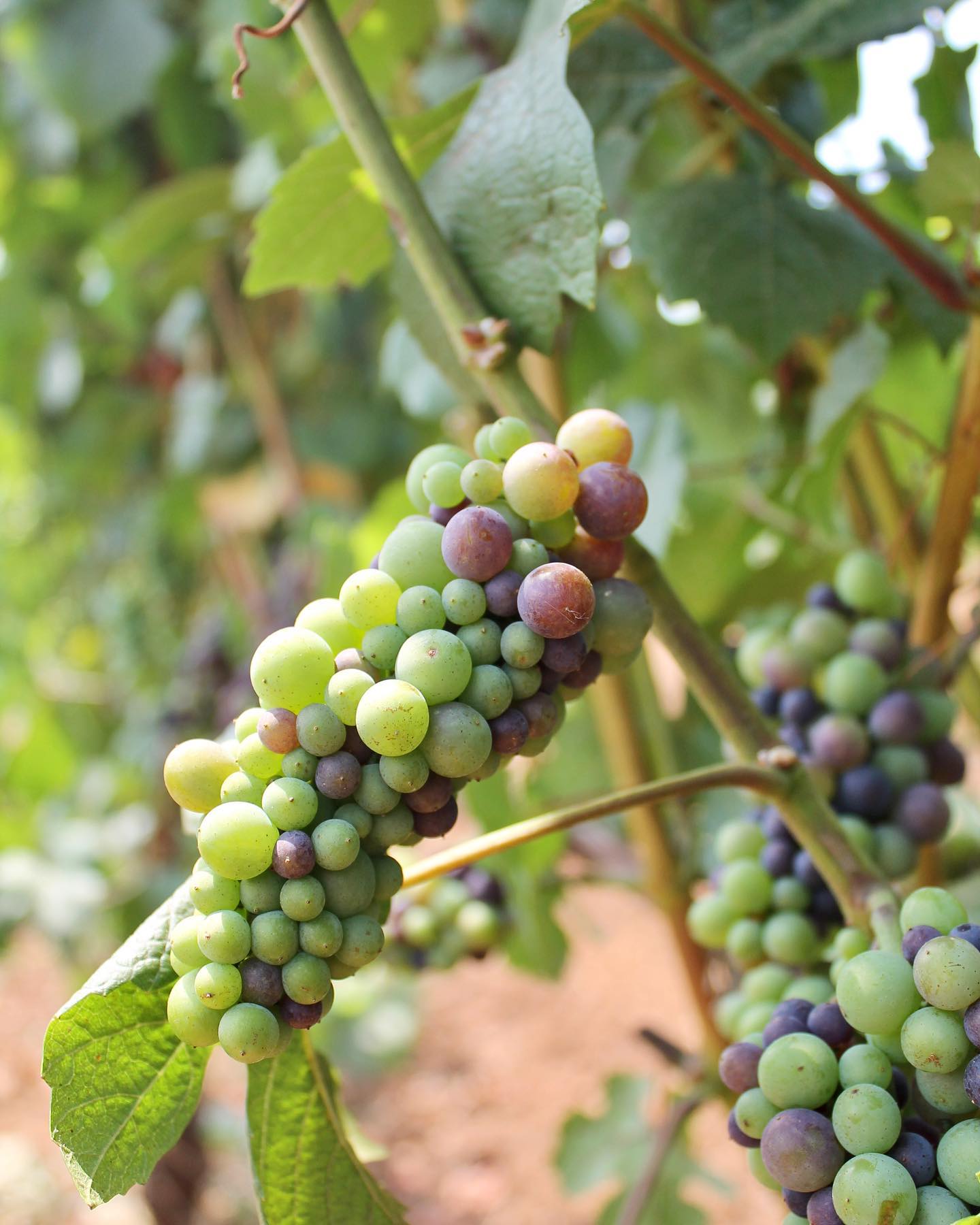 Let’s start with sugar. The amount of sugar in the grape defines how much alcohol will result in the wine. Note though: this does not determine whether or not a wine is sweet, as there are several methods to sweeten a wine: from adding sugar to pausing fermentation early. Next up: Acidity. Dominique must find the sweet spot between harvesting a grape that’s too acidic and waiting so long that the acid drops and the brightness grows flabby. Flavors are up next: the juice within the grapes may not be wine yet, but the same flavors carry over. “You want the flavors in the wine to be seen first in the grapes,” Dominique said. If you harvest too early, “green flavors” (as Dominique puts it) will result: greens, vegetables, tomato leaf, etc. But if you harvest too late, the flavors will pass their prime and grow jammy and overripe. Finally, we have tannins: without tannins, the wine lacks brightness and a punch, but wait too long and the tannins grow bitter, giving off more of a tonic profile better suited for gin and other hard alcohols. 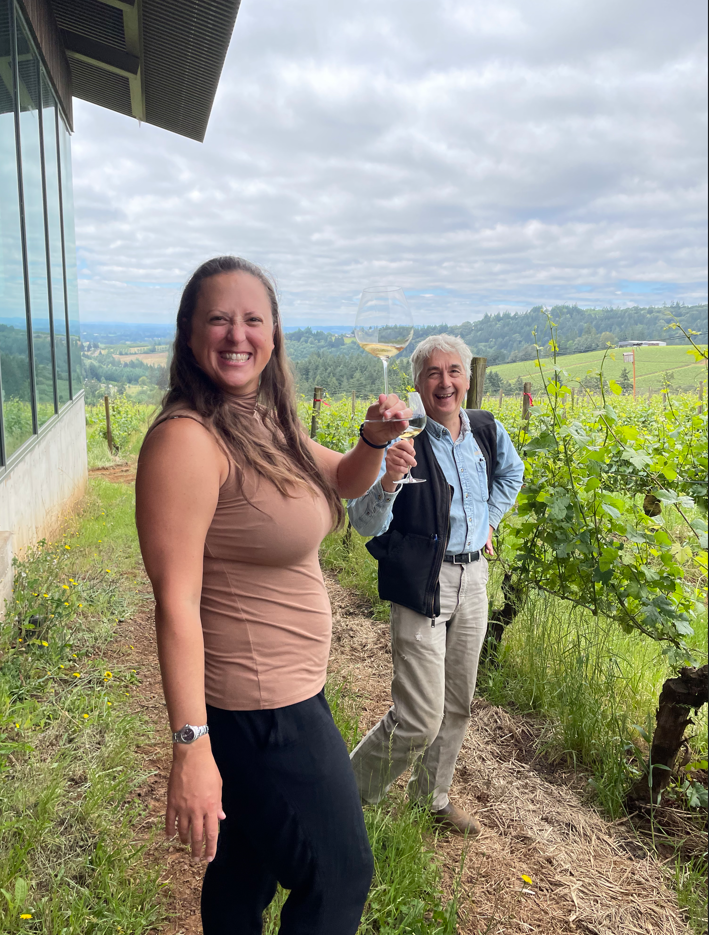 Dom generously shares his knowledge with Lucy (your blog-writer) 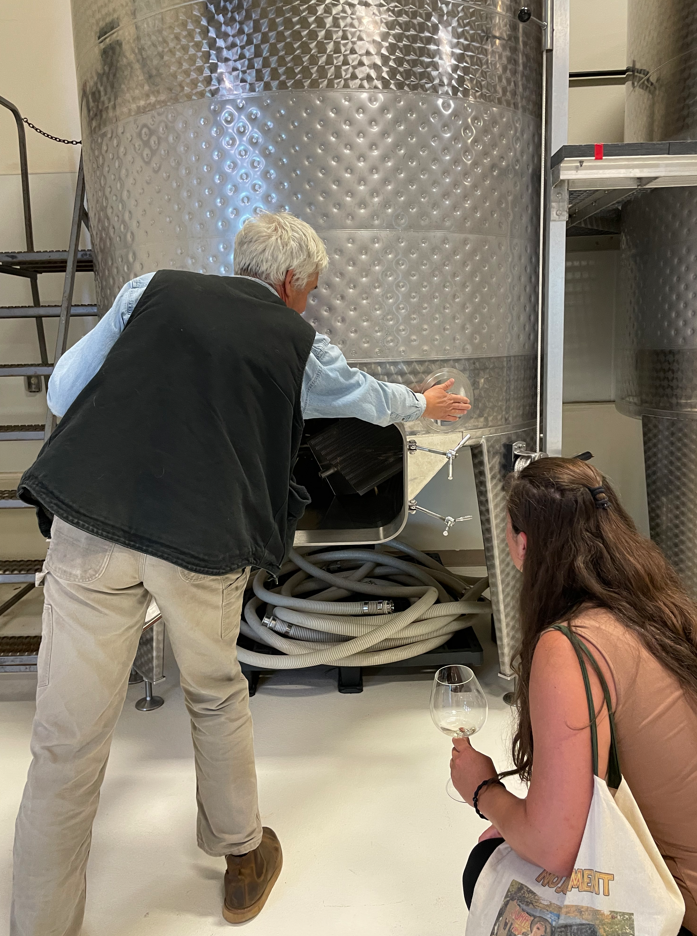 Front seats for the process…… 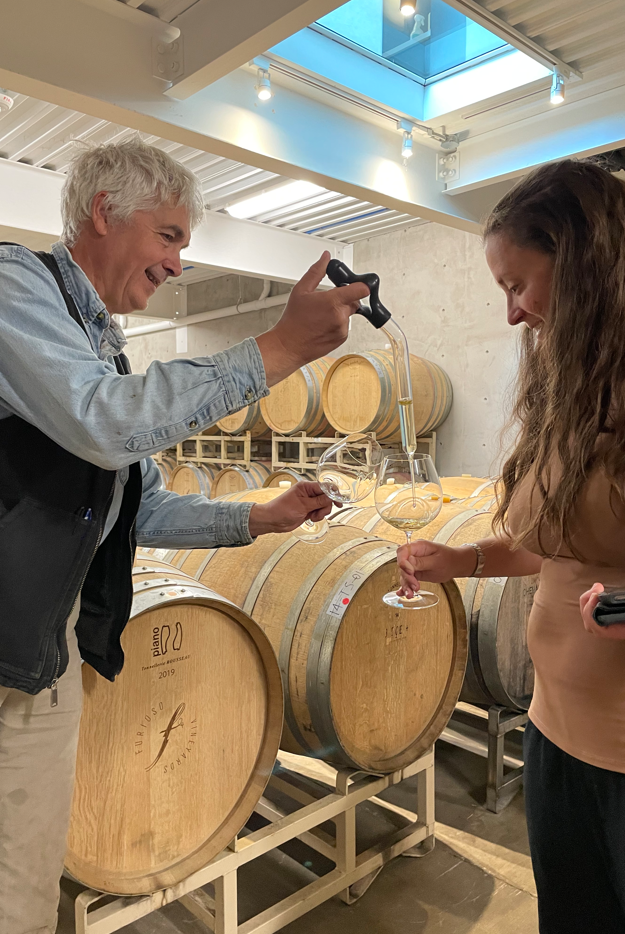 And a taste from the barrel!

As if that wasn’t difficult enough to balance, all four of these attributes have different growing arcs, ripening at different speeds. While sugar goes up with time, acidity drops with both time and heat; the flavors of the wine curve in a bell shape, and the tannins curve upward, but slower than sugar. This gives the winemaker a tiny window to find the right balance, if that window exists at all. “Sometimes, it’s a trade off,” Dominique said. “What sort of wine do we want to make?” But that’s also what’s so special and exciting about wine. Each bottle is a time capsule, a unique stamp of that year’s harvest, climate, and winemaker. Even two vintages of the same wine block will have differences. “If the fruit is good though,” Dominique said, “there is no reason to make bad wine. Unless the winemaker is lousy.” 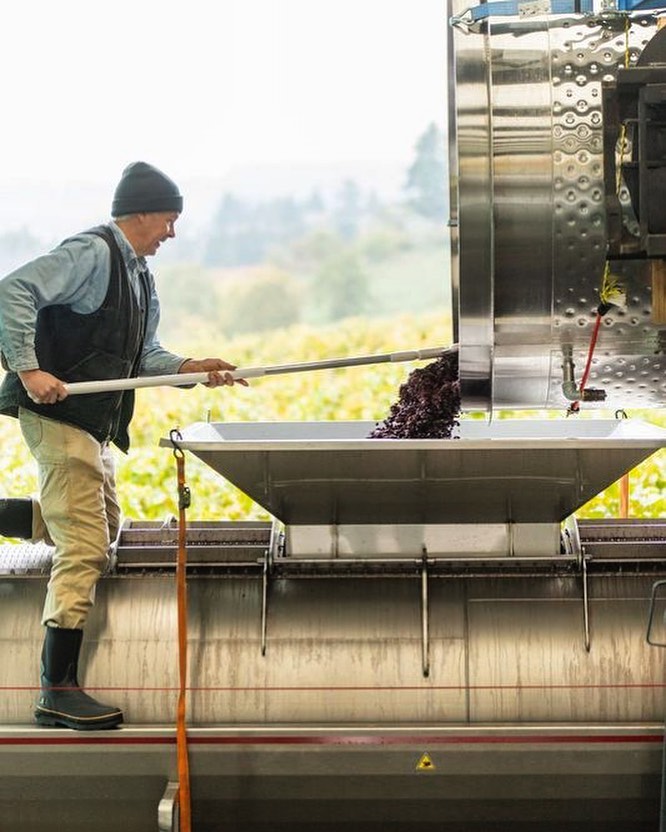 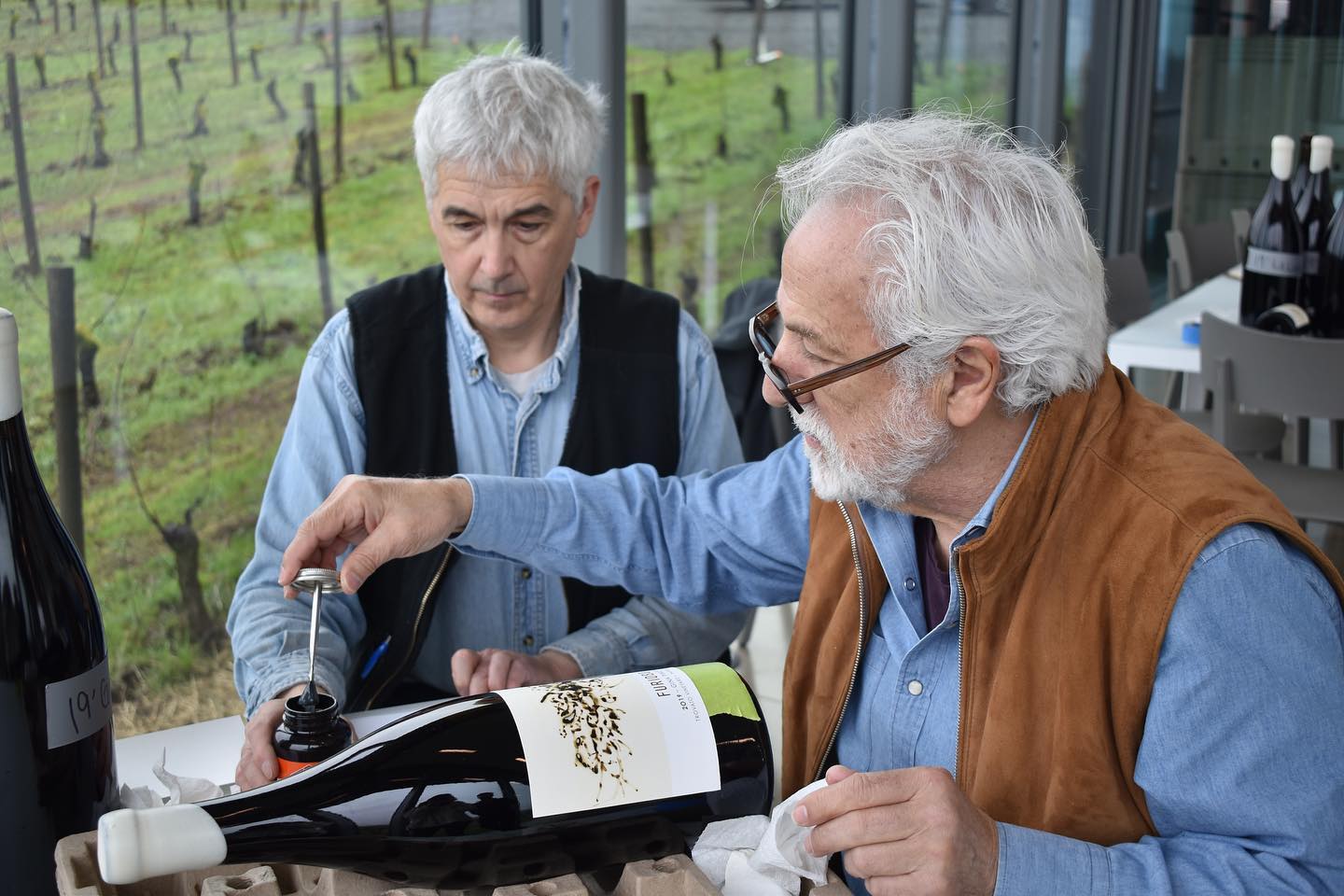 As winemaker, Dominique is involved in every step of the process and with owner Giorgio, ensures their wines are truly delicious and special! 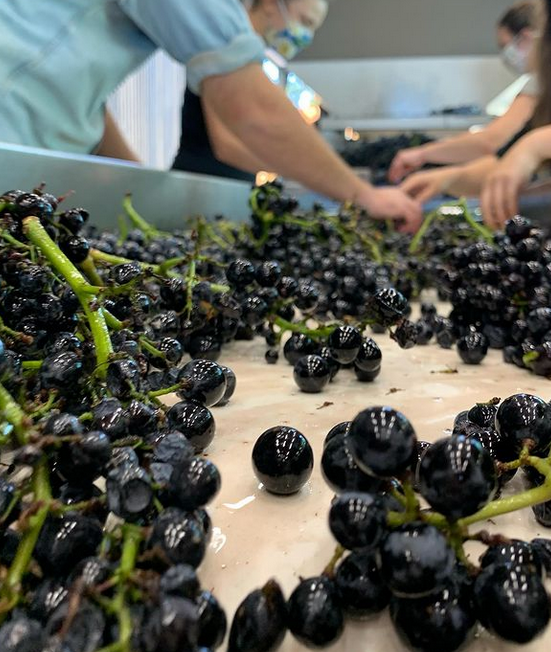 Here, the grapes get sorted, only the good ones make the cut! 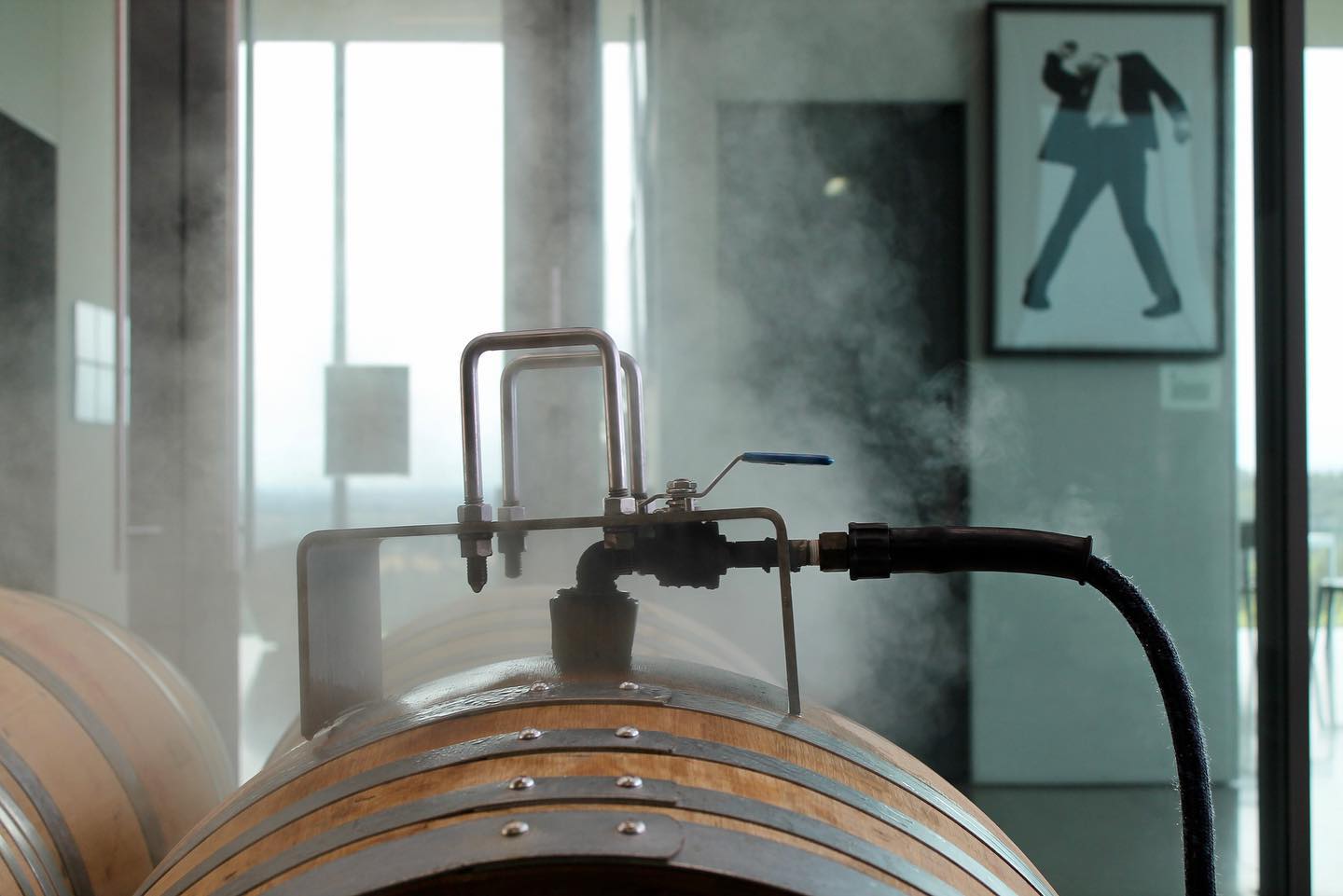 Temperature is another crucial factors, steps are taken to keep the wine cool. 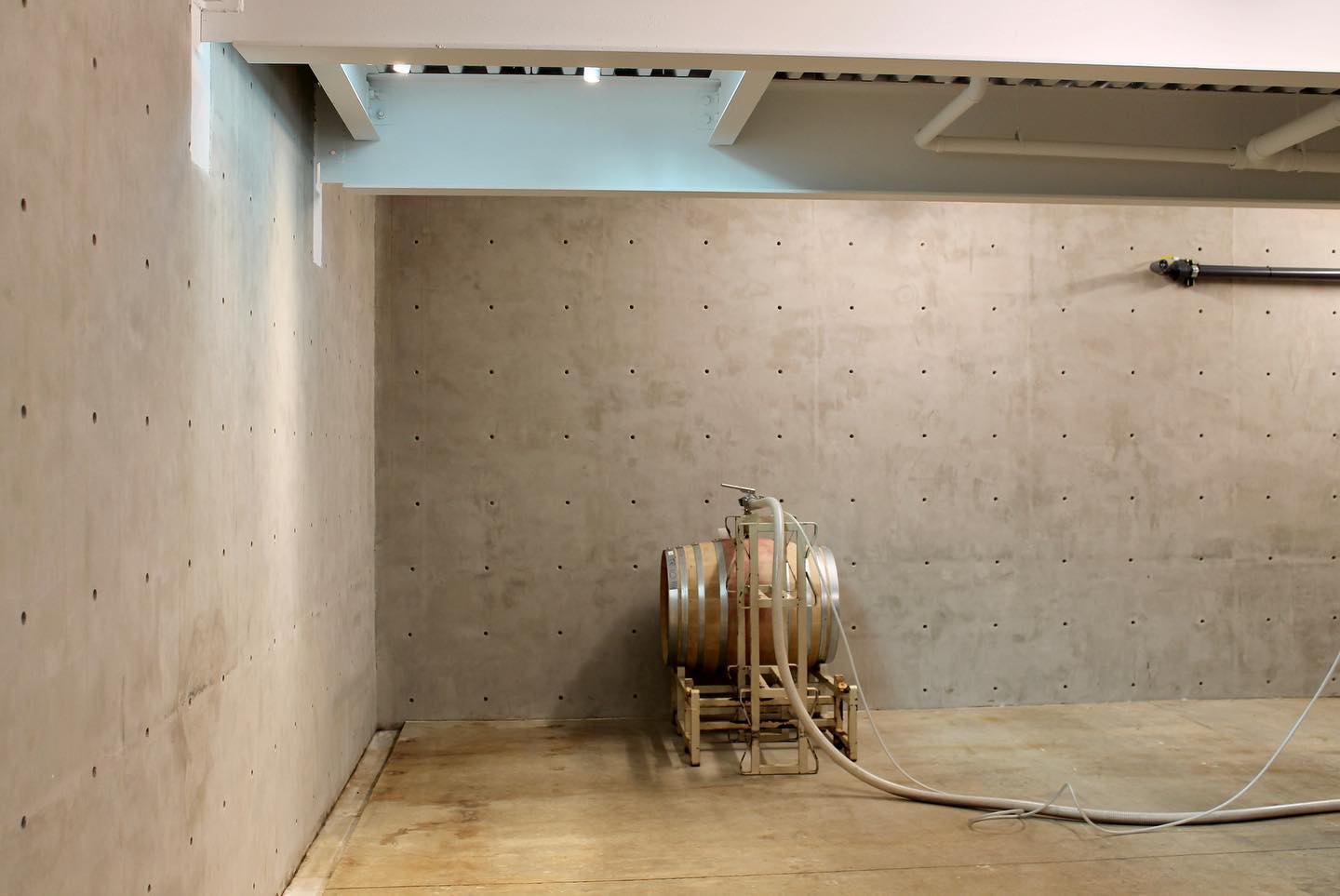 After the wine is harvested, it’s time for the grapes to be sorted and de-stemmed. These processes remove the extra leaves, sticks, and/or “bad” grapes that were collected. The remaining grapes are then placed in large fermenting tanks, where they’re kept for 20-30 days (again, in the case of Pinot Noir). During this time, the yeast turns the sugar from the juice into alcohol. The wine is pumped over twice a day to collect more juice, extract the color the skins, (the juice itself has no color; red wine is only red because of the skins) and extract that last dose of tannins.

It’s important to note that when it comes to wine, temperature matters. Fermentation creates heat, which is not good for the flavors of wine, so the reds at Furioso are kept no higher than 85 degrees in order to avoid reduction, which turns the flavors of the wine into those resembling onions, garlic, and other profiles not exactly ideal for wine.  This is done by pumping cold glycol through the tanks to keep them cool. 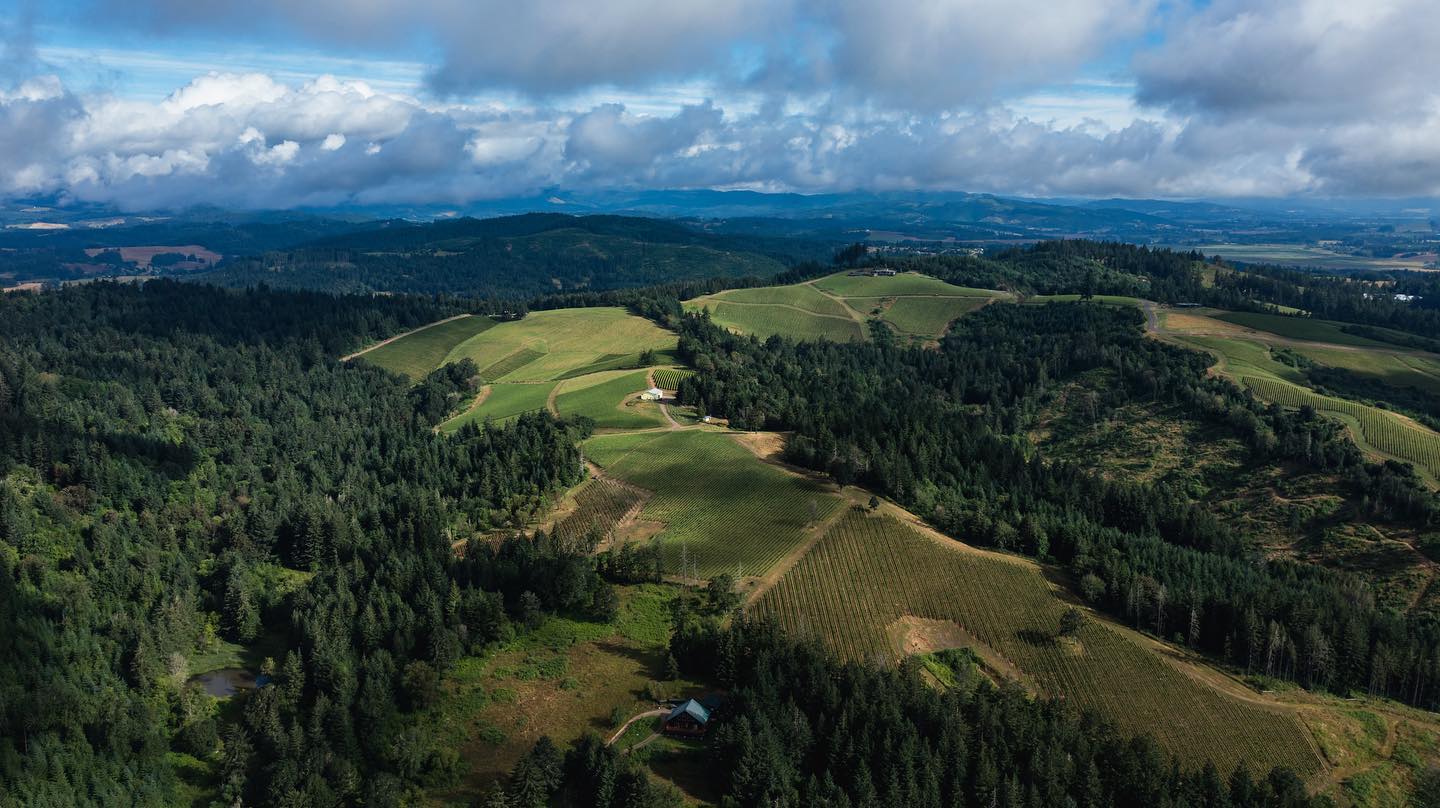 At this point, the wine is strained through a valve for a “free-run” collection (not pumped). This leaves the wine-soaked skins behind to be pressed, which then extracts the remaining wine. (About two-thirds to one-third, free-run to pressed wine.) Now you might be thinking: Why isn’t the wine only pressed? Wouldn’t that save time? Generally speaking, free run wine will produce a better quality, but the pressed wine gives an extra creative palate to the winemaker to incorporate in as they see fit.

*While we are focusing on Pinot Noir for this post, it’s important to note that white wines go through a different process. Most notably they are kept at cooler temperatures, which help the aromatics, and the wine is fermented after it is pressed, allowing the juice to automatically be collected sans skins. After being pressed though, it’s time for both red and white wines to be barreled.

The typical Pinot Noir ages for about 10 months in the barrel, which means it’s collected shortly before the following harvest. Some reds then undergo a second fermentation process (usually around February), which alters the chemistry of the grape, transforming the malic acid (tart, intense, think green apple) into lactic acid (the type found in milk), which encourages the subtlety of Pinot Noir and Chardonnay. But again, exactly when and how that balance is found is up to the winemaker. 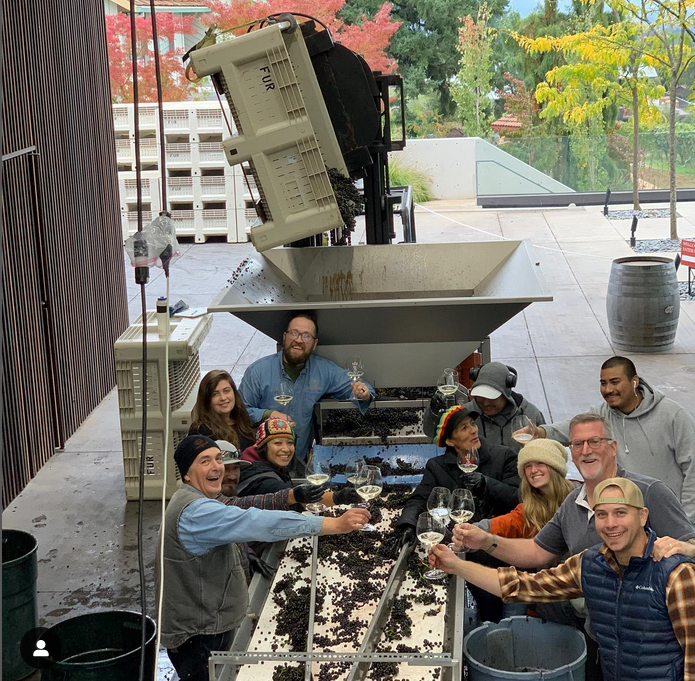 Winemaking is truly a team sport! 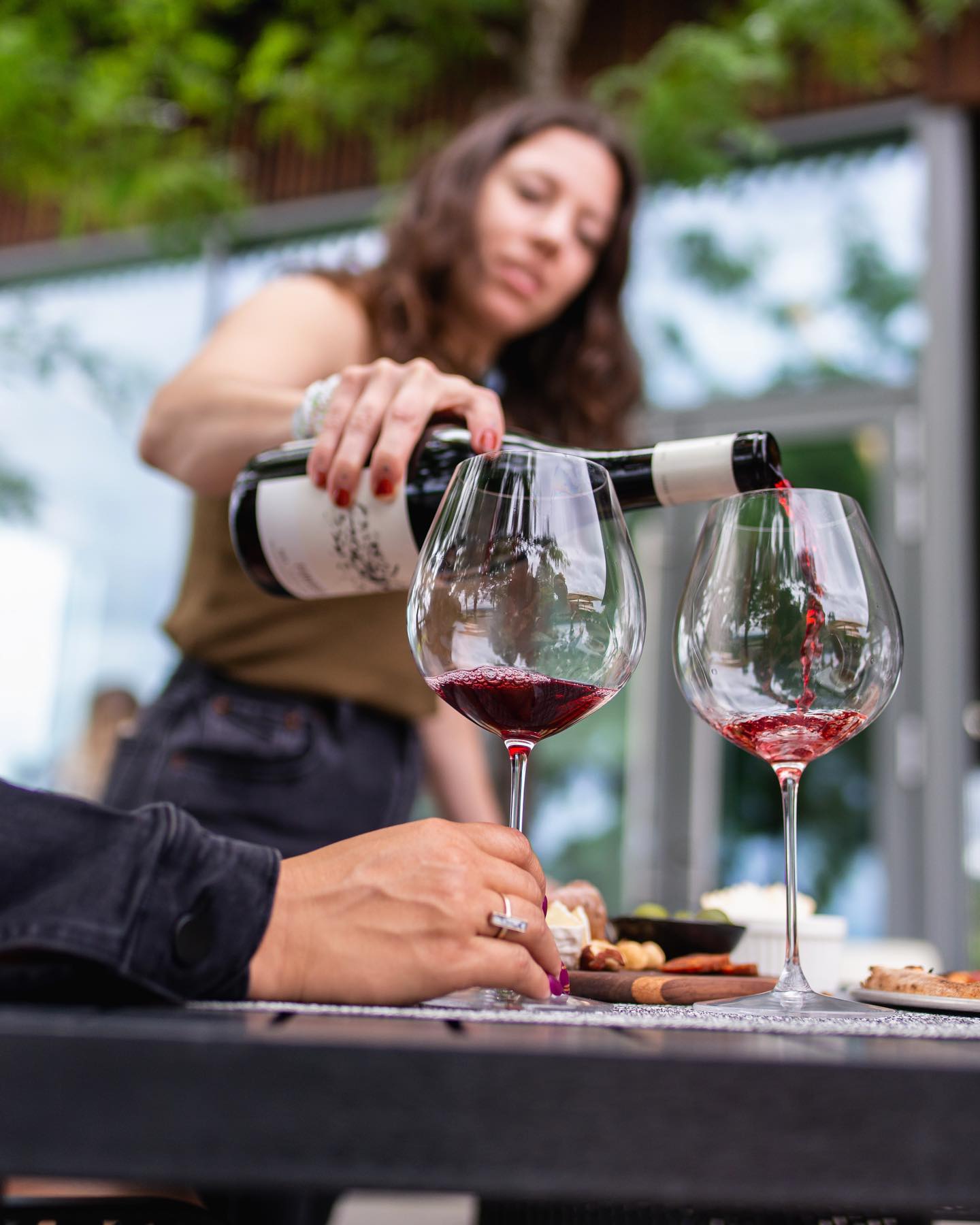 Finally, it is ready for the glass! What a journey this wine has been on! 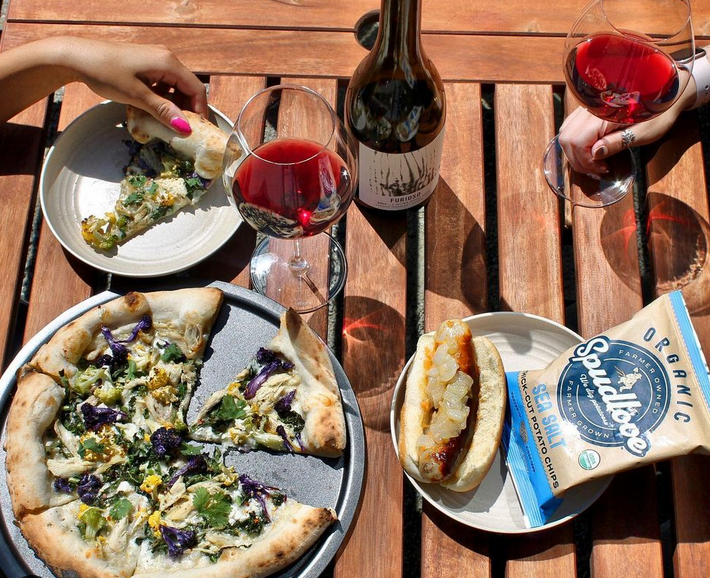 While most of the flavor comes naturally from the grapes, the winemaker continues to shine throughout the barreling process. What types of barrels (new oak, vs. neutral oak for example) will change the flavor profile, with new oak barrels having a stronger, more dramatic effect on the final product. The winemaker then chooses which barrels to combine, and this is where creativity meets the science. The result is a series of unique combinations that will not be found elsewhere. After barreling, the process moves pretty quickly. Racking comes next, which separates the clear portion of wine from any leftover sediment, and then it’s time to bottle (a daunting task when you realize that each barrel carries enough wine for about 300 bottles). When the bottling is complete and you’re holding the final product in your hand, it’s finally (yet so worth the wait) ready to drink or save for a special occasion. Just declare a toast to your winemaker, who doesn’t stop for a break when the bottling is complete but instead dives into the work of next year’s vintage.

The Furioso Tasting Room is open daily from 11am-4:30pm. Reservations are highly recommended but walk-ins are still welcome. And if you’re hoping for some night life, check out Furioso’s website for their upcoming nightly bar service (opening in August), including obscure wines from all over the world and pizza provided by Wooden Heart food truck. We at The Dundee would love to host you here for your visit!

Learn More about Furioso
Book Now
Sign up for our Newsletter

All photos taken from Furioso’s Instagram, except the photos with Lucy (photo credit: Jenna White).

SIGN UP FOR OUR NEWSLETTER BY FILLING OUT THE FORM